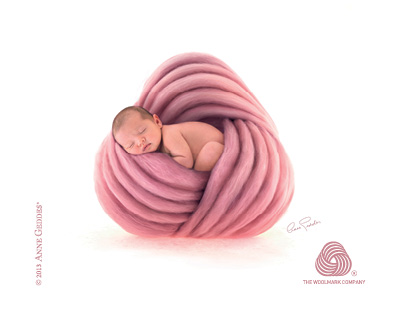 In positive news for eczema sufferers, recently published research funded by The Woolmark Company has demonstrated that wearing superfine Merino wool next to the skin is therapeutic for those suffering from the chronic skin condition. This adds to a growing number of research findings supporting the health and wellbeing benefits of wool products.

Eczema, also known as atopic dermatitis, now affects 20% to 30% of children; its prevalence amongst adults and children varies geographically and is increasing in many countries, with sufferers having dysfunctional skin that dries out and can lead to cracked skin, bacterial infection, redness, scratching and itching.

However, dermatology trials have shown that adult and infant eczema sufferers have reduced symptoms when wearing superfine Merino wool garments next to the skin.

When worn next to skin, superfine Merino wool works as a dynamic buffer, helping maintain a more stable humidity and temperature in the micro-climate between the fabric and the skin. Wool garments are the most breathable of the common apparel types, absorbing and releasing twice as much moisture vapour as cotton and thirty times as much as polyester. It appears superfine Merino wool acts like a second skin for these people whose ‘first’ skin is too dry.

The theory that wool’s unique moisture management could benefit eczema sufferers was put to the test in a twelve-week clinical trial, which confirmed the beneficial findings of wearing superfine Merino wool garments with a mean fibre diameter less than or equal to 17.5 micron.

The Woolmark Company has also created a video explaining the therapeutic benefits of superfine Merino wool. Click here for link.

A study of approximately 40 babies and young children under 3 years old, at the Murdoch Childrens Research Institute (MCRI) in Melbourne, showed significant advantages of superfine Merino wool base-layers rather than cotton in improving the symptoms of eczema.

Published in the British Journal of Dermatology in July, the study challenges generalisations that wool is to be avoided by children with eczema. The study concluded that traditional management guidelines classing all wool-based clothing as irritants should be modified to include superfine Merino wool as a recommended clothing choice in childhood atopic dermatitis.

In fact, a highly esteemed group of medical professionals from across the world has reviewed research papers published during the past 100 years to critically assess scientific studies that claimed wool causes allergy. The group has now published a paper “Debunking the Myth of Wool Allergy” with the primary conclusion there is no credible evidence wool is an allergen. It found that if a fabric does cause sensations of itch and prickle on the skin then it is because of the large diameter of the fibres and not due to the fibre type being wool.